Hitchhiker's Guide to the Galaxy...

If you're British, you will LOVE this movie.

If you're anyone else, you will be hanging on to a thread of consciousness and will wonder why, or you;d plain want a gun and would be torn between shooting the screen or ending your misery. I thought this would finally be the first movie that I had fallen asleep to. Everything in it failed...EVERYTHING. I laughed maybe twice, and they weren't hearty laughs. The only thing I maybe enjoyed was looking at Zooey Deshanel, although I have to admit it seemed like she aged about 10 years since the last couple movies I've seen her in. In conclusion, unless you're into that British lame one-liner and silly name humor, this plain isn't for you. I don't even know Mos Def but was finding myself wondering why he lowered himself to be in this movie. I hope the book wasn't this bad, because then I'd have to wonder about why so many morons liked the book to warrant a pathetic movie being made about it.

all i can say is i have still not seen the movie and am not entirely sure i want to, i tend to be what one would call a purist (i like things to stick close to the original format i saw, heard, or read it in) and pretty much everyone who has seen it has had bad things to say about examples of where it left the original style entirely too much.

My Work In Progress</P>
M

>(i like things to stick close to the original format
> i saw, heard, or read it in)

Really. Because you do realize that Douglas Adams himself said that there was no "canon" as such in the Hitchhiker's Guide series, as the books, radio play, BBC TV series, and computer game all had their own semi-different take on a general idea, right?

That said, I wouldn't see Hitchhiker's Guide again, but I plan to read the books again. The movie would have been amazing had it been about two hours longer. The fact of the matter is that while everything in the movie is a good idea and it smacks of good writing (which is logical, as Douglas Adams co-wrote the screenplay), it's way too fast-paced. A lot of its own diversions from the goddamn book purists' standpoints are very good, but everything in the movie is woefully underexplained. Unless you've read the books, heard the radio play, seen the TV series, or played the game, everything will be moving so quickly that you won't have any idea what the hell is going on. There's very little digression in terms of explaining various plot points (I won't get into them because that would be spoilers, but I'll explain if pressed to do so), so I myself was left with a whole bunch of unresolved questions.

That said, the acting was fantastic, apart from Zooey Deschanel. She couldn't act worth a goddamn, but Martin Freeman, Sam Rockwell, and Mos Def all played their parts perfectly. I suppose the best way to describe the movie would be to quote Zaphod from the first book, that is, "Ten out of ten for style, but minus several million for good thinking, yeah?"

The problem with the movie is that it's one of those cases where it works on paper, but doesn't work on celluloid. The books were hilarious, I wasn't really jazzed by the movie. Excepting Sam Rockwell.

Moogle has a point that there's no real canon to the Guide... but I am entitled to thinking this version of the canon just didn't do much for me.

The book was terrible in my opinion

I read the first book. I like my father thought it was very bad. The humour was not my cup of tea. Lots of other people obviously enjoy the book.

I've heard the radio show more times that I'd care to count, the movie is closer to that than the books (just by the sheer amount of dialogue, intonation, and little sound effects). I can't imagine how confusing it must have been for someone who doesn't already know the story...

Hmm. I'm a die-hard Adams and Guide fan, and I loved it.

> Really. Because you do realize that Douglas Adams himself
> said that there was no "canon" as such in the Hitchhiker's
> Guide series, as the books, radio play, BBC TV series, and
> computer game all had their own semi-different take on a
> general idea, right?

yeah. my brain's awful purty, ain't it if it makes things any better i'm barely on the charts for ODD or OCD. it's only the ADD and AS that have me good. and my brother is even worse on those two.

My Work In Progress</P>
S

I didn't think it was terrible, but I did think it was a bit of a disappointment. I agree with Moogle that the acting/casting was good, but the jokes didn't work quite as well as in the written form. I think part of the problem was that they couldn't set them up appropriately in such a short amount of time. Anyway, I've never heard the radio show, so maybe it wasn't so different from that.

> That said, the acting was fantastic, apart from Zooey
> Deschanel. She couldn't act worth a goddamn, but Martin
>

yeah.. but Zooey is soo cute. I don't know why. She's got that nerdy/geeky look, and a fantastic rear end.<img src=smilies/liefde.gif>

That may have been the problem with the movie...you wouldn't have to just be a fan of the book...you'd have to REALLY REALLY be a fan of it. I'm all for silly stuff, but the silly stuff in the movie became predictable rather early. They really ran some things into the ground (like Sam Rockwell's character being an idiot), and a lot of the one-liners were groaners seen a mile away, like they were trying too hard to be cute. I could tell the fans of the book in the audience rather easily...every single word out of that depressed robot's mouth made them laugh. I don't know...considering the book seems to charm so many intellectuals, I was surprised at how shallow the movie was.

> yeah.. but Zooey is soo cute. I don't know why. She's got
> that nerdy/geeky look, and a fantastic rear end.

Yea...thankfully since I didn't like the movie at all, I could care less about the acting, so I was diggin' her.

> I don't
> know...considering the book seems to charm so many
> intellectuals, I was surprised at how shallow the movie was.

The problem was that the movie was considerably less subtle. The jokes were delivered in such a way as to smack you in the face rather than tickle your funny bone. Only in the brief moments when they quoted entries from the Hitchhiker's Guide itself did I see glimmers of the clever detail that gave the book its charm.

To give an example of how the lack of subtlety ruined it, consider the bit with the Vogons reading poetry. If I remember correctly, the book gave a several-page description of the Vogons, including segments about how you shouldn't have them read poetry to you. Then, after this long description, they gradually built up to a scene where the Vogon leader was reading poetry to the captured hitchhikers. Because of time, the movie, made one quick reference to bad Vogon poetry and then jumped into the scene with the Vogon leader reading his to Arthur and Ford. Done this way, it seemed cheaper and more childish. At least they did include references to the other examples of the "worst poetry in the galaxy", but unfortunately, the scene was already underway at that point and it provided little more than a distraction.

> and have Aspergers Syndrome (high
> functioning autism, check out:
> http://www.udel.edu/bkirby/asperger/)

Yeah, welcome to the club, diagnosed since 1998 and hoping that you actually have it and weren't diagnosed because it's a fad (I'm not saying I doubt you, just saying I hope it isn't a misdiganosis). Over there in the Banned Users Arena you can see our other ZMD inductee, Brad Mecoli.

> yeah.. but Zooey is soo cute. I don't know why. She's got
> that nerdy/geeky look, and a fantastic rear end.

Welp...haven't seen this movie yet, but ya know...this is something I can definitely agree with you on.
<img src=smilies/magbiggrin.gif> 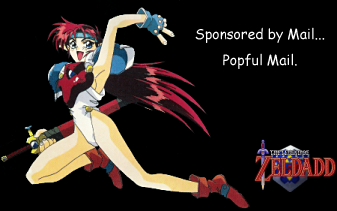 Why else would you carry such a big sword?</a></P>

A bit they really should have left in there, which there was absolutely no sense in leaving out, was Arthur and Ford's exchange in the airlock about how Arthur should've listened to what his mother told him when he was young. Instead they just paced around uneasily...

the OCD and ODD, imo, are misdiagnosed. the ADD is probably as well. but i am basically a model of AS. exactly what AS is, i have no clue. what can be done about it? absolutely nothing, and so i don't really care, other than to try to keep in mind that my tendencies are not normal and try to keep them in check

I have Asbergers, and ADD too. In a way so that I can't work with people, so I'm considered a senior citizen and live on insurence money at the age of 23 (I'm not kidding).
I have a hard time going to the store becouse I'm afraid of people. The only time I can stand being around people is when I'm drunk of my ass or high as a kite.
Also why I seldom post anything here is not becouse I don't have anything to say but becouse I don't dare.
Thing is it doesn't bother me that much becouse I'm doing what I love, wich is playing with comuters. I'd be the perfect IRC candidate but it's too scary when its realtime. Now how's that for pathetic. <img src=smilies/cwm11.gif>

well. i've finally decided i'm going to go see it. i'm planning on taking my dad out to see it on or near daddies day